ORLANDO, Fla (July 25, 2013) FlightScope would like to congratulate Phil Mickelson on his win at this year’s Open Championship. For the 3rd year in a row FlightScope® (the premier portable indoor-outdoor ball-flight and launch monitor, and the world’s first-ever 3D Doppler tracking radar for golf) was featured at The Open Championship. This year FlightScope® had the honor of being on that all important par 5, 17th tee. Many people questioned whether Mickelson would even be able to reach the green in two without his driver in his bag. After the tournament Mickelson said “…the two 3-woods I hit on 17 were among the best I have ever hit…” and FlightScope® was there to measure all the data. 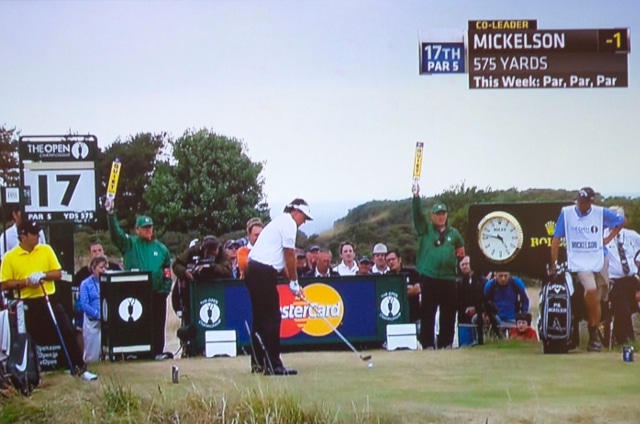 Other players’ data that is also worth mentioning are Adam Scott and Charl Schwartzal. Both these guys were able to generate impressive club and ball data respectively on the 17th:

For more information on the wireless FlightScope X2 launch monitor or to see the revolutionary FlightScope Skills in action, visit www.FlightScope.com.

ABOUT FLIGHTSCOPE
EDH, maker of FlightScope®, is a product development company founded in 1989 by Henri Johnson, inventor and electronic engineer. EDH develops products for the defense and sports markets, and has as its core expertise the design and development of 3D tracking radar systems. FlightScope® was first demonstrated in Ponte Vedra Beach, Fl., in 2001; and was introduced at the 2004 PGA Merchandise Show. In addition to its use at high-profile teaching academies and by club fitters worldwide, Tour professionals and avid golfers devoted to game improvement use FlightScope®, for personal practice. FlightScope® is also known for its ease of use as well as the precision and accuracy of its technology. FlightScope® employs phased array and ballistic tracking technology to accurately record ball trajectory and actual launch data.