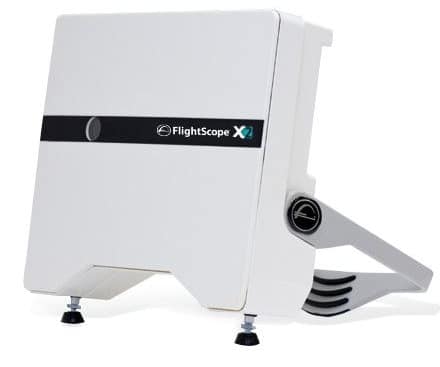 The most advanced teaching and fitting tool

FlightScope X2 was the world’s first completely wireless, battery-operated, 3D Doppler tracking radar for golf. The X2 was known for its unmatched accuracy, affordability, and revolutionary apps. Side-by-side video and club or ball data comparison was available on the VX2 app and fully customizable assessments in the X2 Skills app for player benchmarking.

The FlightScope X2 target market was teaching professionals, tour players, club fitters and retail stores. The X2 would also be suited to home use in a suitable environment and could be used in conjunction with the FlightScope PC software, Apple and Android applications. The X2 could also be used as a golf simulator.

The FlightScope X2 was the next generation 3D club and ball tracking radar. It provided 27 unique measurements of club, ball and swing data. It was considered the industry leader because the X2 surpassed the competition in all aspects ranging from design to manufacture to worldwide support. Verified with ultra-high speed camera, the X2 provided unmatched accuracy.

The FlightScope X2 comprised of a battery powered sensor unit with USB and WiFi data interfaces to a PC and mobile devices. The X2's software was able to run on Windows, iOS and Android systems.